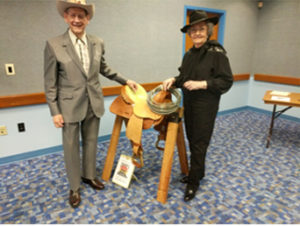 William A. (Bill) Cummins the Humble Cowboy is a Trick Roper and a Stonecroft.org global ministry speaker. He and his sidekick Ann regularly perform at Stonecroft events throughout Florida. See video clip of his show on website: http://www.caipublishing.net

Bill is known as “America’s First Feed Bucket Philosopher.” His life demonstrates that “WHEN THE DREAM IS BIG ENOUGH THE FACTS DON’T COUNT.” Bill’s early dreams took him from a farm in Ohio to radio and stage as a singing cowboy and a 300 mile trip on horseback when he was 18.

During his teenage years, Bill trained a golden palomino stallion named King to perform on stage and talk to the audience. Bill would then entertain with trick-roping and sing with his western band. He headlined across the Midwest as “Smilin’ Bill and his Wonder Horse King” for several years and has been called a “LIVING LEGEND.”

At age 20 Bill met the Lord, left cowboy showbiz, and 9 years later was registered as a professional engineer. Bill is a Diplomate in the American Association of Environmental Engineers. Millions of people throughout the Midwest are safely drinking water today from the numerous water facilities he designed and managed.

During his career, Bill married, raised a family and filled many pulpits as a Methodist Lay Speaker. He and his wife, Ann, live in Port Orange, Florida and have 5 children, 11 grandchildren, and 5 great-grandchildren. He is an award-winning author, publisher, and enrichment speaker.

Today, Bill brings the allure of trick-roping and the humor of Will Rogers to his shows with ole’ time cowboy yarns and hi-tech stories. Something the whole family can enjoy.

All of Bill’s books are made available worldwide by Ingram distributors:

Descriptions of Bill and his books are shown on website: http://www.caipublishing.net